"For the updated dates please go to Agenda" 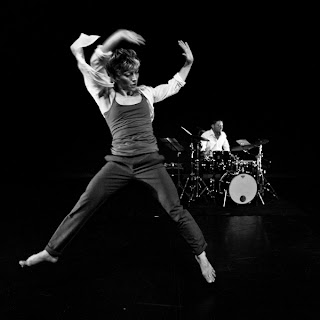 From 2009 and up to the present I'm part of Wonderland's crew, an instant composed music & dance performance for children and family, playing monthly in different venues in Amsterdam and other cities of The Netherlands and Europe. 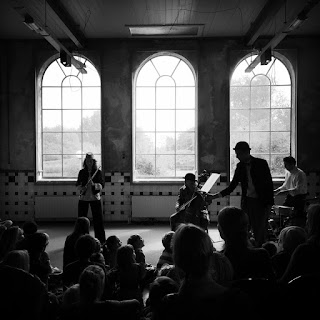 2019 I composed and recorded a 5 minutes piece named "Tinco" for a choreography of Dayna Morales (NL)
From the end of 2014 till the beginning of  2019 Freek Vielen and The Ambush Party collaborate for a theatre production: ‘So it goes’ based on Kurt Vonneguts' iconic book Slaughter-house Five
The production was made by 'De Tijd' in Antwerp and the NL-BE tour has taken them to Rotterdam, Brussels, Amsterdam, Groningen, Antwerp, Brugge, Utrecht, Lokeren, Hasselt, Arnhem, Dilbeek, Nona.

In March 2017 I was involved in The Pulse, a work in progress dance piece by Iris van Peppen that was played at - In de Ruimte, Utrecht. With Joana Borges -dance; Marc A. Nukoop - electr., Ard Kok -e gr.

Together with Florian Richter (music coordinator), Daniel Smit and Jasper Courtens we are creating the music for the dance piece Beestenbended conceptualized and choreographed by John Wooter.
The piece will be perform -with live music- on Dec. 15, 16, 17 & 18, 2015 at the Danstheater in Amsterdam.

May 2014 - I have the honor to substitute Alan Purves in a theater piece and so playing with guitar player Niels Brouwer and Felix Strategier. 44 performances! Garagepoes is the name of the production, from Flint Theater group (Amsterdam).

The Ambush Party has been live-performing "Sommige dingen (vallen in het water)", a theater piece produced by Bronx Theater in Bruxelles.
We rehearsed intensively aug. and sept. 2012
Sept. 22nd 2012 was the premiere at Bronx theater; followed by 11 performances in whole Belgium.

DanSebastian was a special project Commissioned by "Passe ton Bach d'abord Fest" with Adeline Salles on flute and dancers Makiko Ito and Sylvia Benett.
It is about J.S. Bach's music and music & dance improvisation, has been played twice in Toulouse, June 2012.

We won the OH! price -Spain- for the best theater music of the last year - Feb. 2012
Mapi Quintana, Jacobo de Miguel and me, we have worked the music of the spanish reposition of "The seagull" by Chejov. This has been premiered in the Jovellanos Theater of Gijon (Spain) on Jan. 14th, 2011, by Freedonia producciones theater group.
www.freedoniaproducciones.com 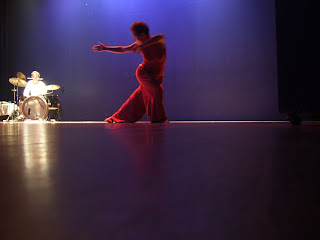 The dance piece "bounce me too - efecto rebote" by Valeria Primost with music of mine, was premiered in oct. 2010 at the Festival Buenos Aires Danza, Argentina.

Together with Baris Arturk (Tk) we have composed and performed live the music for "BeHold", a concept and choreography of Jack Gallager and Tan Temel, premiere at Cemal Resit Rey Concert Hall, Istambul & Theater Bellevue, Amsterdam, in Sept. and Oct. 2010 respectively.

I ve composed and recorded the music for the piece "FEVER-Bounce me" choreographed by Valeria Primost for MIKS Dance Theatre Company(UK).
FEVER premiered at Laban Theatre (London) on Nov 2009, and played since then on many venues in England and the rest of Europe.
See the video: www.vimeo.com/9144813

Together with Valeria Primost (dancer and choreographer), we started researching into interdisciplinary improvisation in 2003 and we gathered a group of musicians and dancers called "Zap Collective", with whom we performed at Muidepoort Theather, Overtoon 301, a.o.
One year later, we co-founded “The Meeting Point
”, a platform dedicated to the exploration of interdisciplinary improvisation.
This started as a monthly lab of music & dance improvisation run at Bimhuis from 2004 to 2006
This lab was named Monday Match later on and run till June 2018.
The Meeting Point grew as an international platform dedicate to create and support interdisciplinary work based on improvisation.
Thanks to this activities, I've been very lucky to collaborate with many many artists dedicated to research and perform on improvisation. 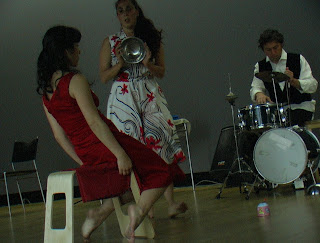 Many people got inspired by our work and they gather new Meeting points in other cities: there was a steady laboratory in Helsinsky and people organizing events in Barcelona and Milan.
www.themeetingpoint-impro.com

Valeria created and directed “the mOving point”, a company of interdisciplinary instant composed pieces.
During 2006 and 2007 We performed at Van Gogh Museum, Artacts Festival (Austria), Kastel Groenevel, Muiderpoort Theater, a.o.
Together with "The Meeting Point" and "the mOving point company", we have performed in festivals, theatres and venues in The Netherlands, Austria, Germany, Uruguay, Venezuela and Argentina.

In 2004 I did the music score, direction and performing of “Think of a wish” by Valeria Primost.

In 1997 I composed together with Oscar Bertea, the music for “Bichos”, choreographed by Sintia Ranieri.

I started working with dancers in 1996, when I became accompany-musician at the National Dance School "María Ruanova" in Buenos Aires, Argentina (IUNA).
I played there until I moved to Amsterdam, in 2001.
During those years, together with Marcos "Pochi Fernandez" and his band "El Angel" we where trying to create performances including contemporary dance during our concerts.


Already in Amsterdam and up to now, I've played for dance lessons at Henny Jurriens Fundation and at the Theater School. 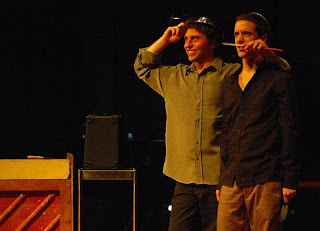 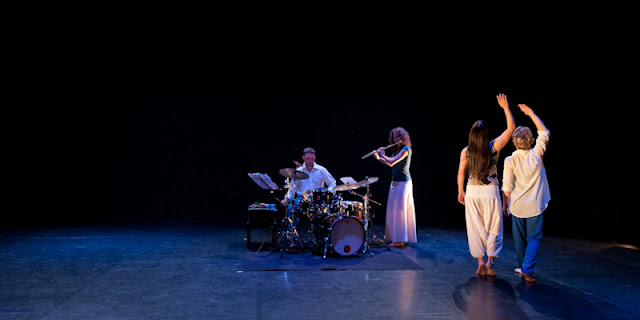